. 感恩師父！感恩大慈大悲救苦救難的觀世音菩薩！
.
感謝以上朋友們的真實分享，您的法布施，能幫助更多需要幫助的人們 ，找到方法、找回健康、獲得更幸福的生活。
也歡迎多多分享，多傳多福，功德無量!!
.
.
《Sharing of inspiration from Guanyin Bodhisattva ~ Part 4》Free from illness throughout the year
.
As the closing of the Lunar year is near, everyone hopes to receive some good luck and peace on this auspicious festive season from Buddha and Bodhisattva. So how do we seek blessings for our love ones so that they can be free from calamities, illness and enjoy longevity? Below are some true experiences which have been shared…
.
1. Jin Ai Pei
In 2015 my father was admitted to the hospital’s intensive care unit and he was bedridden due to heart failure. He could not move and could only blink his eyes or make some sounds from his throat. When he woke up, my mother understood that he wanted to listen to Guanyin Bodhisattva and Medicine Buddha Heart Mantras. After repeated requests to the doctors, we were finally allowed to bring into the intensive care unit a MP3 player with master chanting Guanyin Bodhisattva and Medicine Buddha chant. We prayed sincerely to Buddha for his blessings and did light offering. The doctor said the success rate of doing heart bypass was only 20%. After one month’s evaluation, the doctor finally proposed installing an artificial pacemaker for my father. The surgery was a success! During the hospitalization period, my father also practiced “The Meditation of Greater Illumination” while lying in bed. He gradually improved to practicing the meditation while sitting and finally while standing. The doctors thought it was a miracle. My father is now healthy and very happy. I am very grateful to Buddha, Bodhisattvas and Master for their blessings.
.
2. Jin DeDa
Gratitude to Master! Gratitude to Guanyin Bodhisattva! I had a strong affinity with Guanyin Bodhisattva. I recall that when I was pregnant, I often had internal bleeding during work and had to take leave to rush to the hospital. The doctor often told me that my pregnancy was unstable and at risk of miscarriage. At that time, I often chanted to the name of Guanyin Bodhisattva for blessings to stabilize my pregnancy. One night, I dreamt of a huge Guanyin Bodhisattva lying across the sky. I could not decipher initially why I had that dream. Could it be that Guanyin Bodhisattva was asking me to take a rest? I thought there must be a reason for that dream. So I took two weeks leave. I stayed at my mother-in-law’s house to rest and with her care, my pregnancy gradually became stable. That was the first time I deeply felt that Guanyin Bodhisattva is everywhere.
.
I successfully gave birth to my daughter. When my daughter was about four months old, she fell off from her bed while I was not paying attention. When I frantically picked her up, I found there was a deep concave dent of 0.3 cm on her head. My daughter cried for only a short while and fell asleep. My whole body was trembling with fear as I was afraid that she would never wake up. On my way to the hospital, I was crying in my heart “Guanyin Bodhisattva, please help us”. In the crowded hospital’s emergency room, we could only stand there waiting. My whole hand was trembling throughout and I repeatedly chanted the name of Guanyin Bodhisattva. After performing a tomography scan on my daughter, the doctor asked: “Was she born with the concave dent on her head? There seems to be no problem internally.” What a relief! It was really amazing! I am really very grateful to Guanyin Bodhisattva’s selfless help! This is the second time I deeply felt the presence of Bodhisattva!
.
When you pray with sincerity, the Bodhisattva will be at your side to quietly help you, just like a loving mother. I am very grateful to the compassionate and forgiving Guanyin Bodhisattva for answering our thousands of prayers.
.
Gratitude to Master and Gratitude to Guanyin Bodhisattva!
Thank you to our friends for sharing their testimonies. Your sharing will inspire people who are in need of help, and help them find the methods to achieve good health and happiness in life!
.
The more you share, the more you gain immeasurable merits!!
.
.
#SharingAtLiveBroadcast, #ExtendGoodFortuneAndIncreaseLongevity, #Health #Happiness #SincereChanting,#直播分享、 #却病延年、 #健康快樂、 #真誠念佛 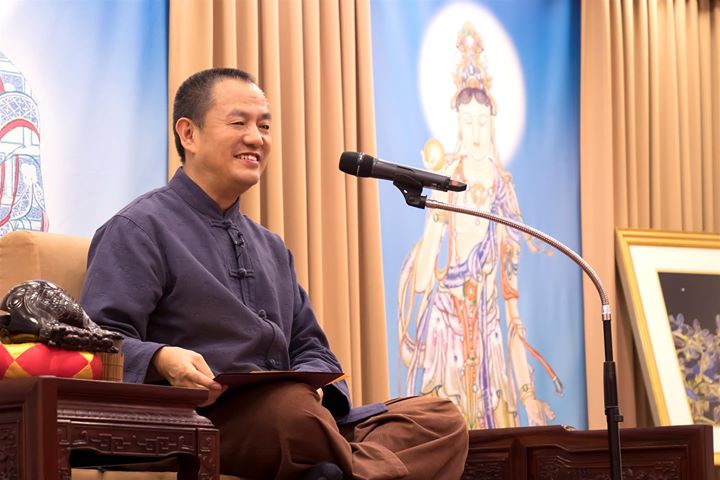 所謂的「開悟」究竟是什麼樣子呢？
.
.
問：「人生好辛苦，修行更不容易，究竟如何才能夠開悟？」
.
開悟是明心見性？開悟是沒有煩惱？
開悟是成佛成仙？開悟是法力無邊？
究竟什麼是開悟呢，平凡如我們，要如何才可能達成？
又如何才能真正解脫痛苦，得到自在、快樂呢？
.
請給自己短短的5分鐘看完這段視頻吧！
相信對您的生命會有所啟發！！
最後，祝福大家都開悟、吉祥、智慧、健康快樂！
.
讚是一種鼓勵，分享是最好的支持。
?歡迎分享，多傳多福！！ ?
.
.
What is “Enlightenment”?
.
Q: “Life is difficult, and cultivation practice is not any easier, how then can we reach Enlightenment?”
.
Is enlightenment a journey of self-discovery?
Is enlightenment the end of troubles?
Is enlightenment about becoming the Buddha or God?
Is enlightenment about gaining boundless power?
What exactly is enlightenment; can ordinary folks like us reach enlightenment?
How can we truly be liberated from pain and suffering, and be peaceful and happy?
.
Please allow yourself a short 5 minutes to complete this video!
I believe you’ll gain some inspiration for your life!!
Lastly, I wish that all of you gain enlightenment, auspiciousness, wisdom, health and happiness!
.
Like is a form of encouragement, sharing is the best form of support.
?Welcome to share the post, as you reap multiple blessings!! ?
.
.
.
#Enlightenment, #Liberation, #Peaceful, #Happy, #Inspiration, #MasterJinBodhiDharmaTalk
#開悟、#解脫、#自在、#快樂、#啟發、#金菩提宗師開示 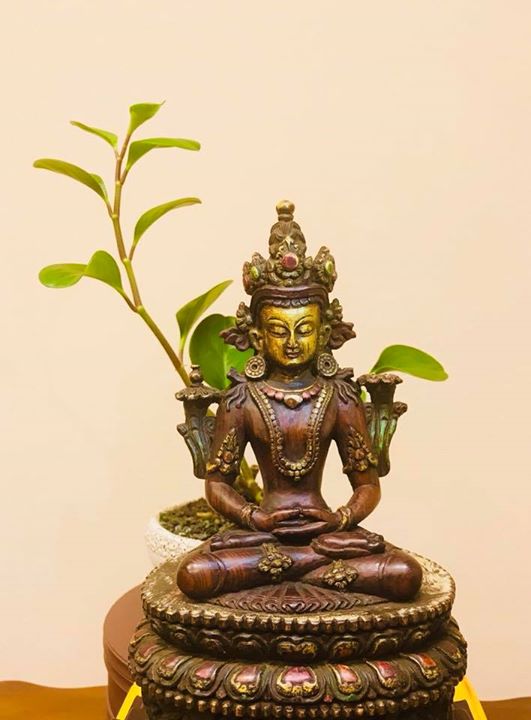 新春—吉祥、如意的故事。
.
新春臨近的吉祥日子裡，在天庭也要過熱鬧的春節，玉帝每年這個時節，都會派下代表「吉祥、如意」二位仙童，下去人間尋找「積善之家」去遞送福氣。
.
吉祥、如意二童子，今年一樣奉召玉帝之命，到人間探訪民情，並且要找到108戶人家，把上天的福氣賜給他們。
.
吉祥、如意二童子，一路走、一路尋，好不容易的送出了107份福氣，就差最後一戶了，忽然間，他倆看到遠處有一片金色的光芒，光芒處還有幾朵彩色的雲朵罩著，真是美麗呀！吉祥、如意二童子非常好奇，走近一看，這戶人家的房子在發著金光呢。
.
只見這家人的大門上，貼著一對威風凜凜的門神，正氣逼人。走進宅院，就看到大廳的門上閃爍著斗大的幾個字「厚德聚福」和「福」字，兩幅春聯，不斷綻放著耀眼的金色光芒。吉祥、如意二童子心想：「這戶人家肯定也是個積善之家，我可以把福氣送給這戶人家，然後回去跟玉帝交旨啦！
.
吉祥、如意二童子正想敲門，只見前方迎來一個可愛的小娃兒來為他開門，映入眼簾的是這一家人，正開心地圍坐在一起吃團圓飯、發紅包。
.
吉祥、如意二童子，向這戶人家的主人_白髮爺爺說明了，他們要到外鄉找尋家人，碰巧看見這幅溫馨的景像，因而思念起家人，也想進來一起圍爐過年。
.
白髮爺爺滿口說：「好呀，我們最愛招呼嬌客啦。」一家人熱情地邀請吉祥、如意二童子坐下來一起吃飯。怕他們趕路著涼，還找來棉衣給他倆穿上，離開前還送給了他們2個大紅包做為盤纏。
.
吉祥、如意二童子很受感動，覺得這戶人家又吉祥、又善良，就把玉帝賜的福氣灑到了這戶人家，然後開開心心的回天庭交差了。
.
.
讚是一種鼓勵，分享是最好的支持。
?歡迎分享，多傳多福！！?
.
.
Spring—a Tale of Auspiciousness and Fulfillment
.
The auspicious Spring season is approaching. In the Heavenly realm, the season is much enjoyed with great festivity. Every year during the season, the Jade Emperor will send two celestial children – Auspicious and Fulfillment – to the earthly realm as representatives to find and deliver blessings to charitable homes.
.
Similarly this year, Auspicious and Fulfillment, under the orders of the Jade Emperor, descended to the sentient world to visit and to find 108 households to spread the Heavenly blessings to these families.
.
Auspicious and Fulfillment journeyed and searched conscientiously, and managed to deliver blessings to 107 households after much effort. They still had one household, however, to deliver blessings. All of a sudden, they sighted a bright golden hue in the distance, accompanied by several colorful clouds in the background – a glorious sight indeed! Auspicious and Fulfillment were most curious and approached to have a look. This family household was radiating golden illumination!
.
At the main door of the house, they saw the image of a suave pair of Door Gods- righteous and imposing. Entering the courtyard, they saw the door of the hall flashing the phrase, “virtuousness gathers fortune” and “fortune” on two couplets, constantly illuminating dazzling golden light. Auspicious and Fulfillment thought to themselves, “This family must also be charitable”. Let us deliver blessings to this family and then report back to the Jade Emperor!
.
Auspicious and Fulfillment were thinking of knocking on the door when they saw an adorable little kid in front approaching to open the door for them. In their line of sight was a family happily seated together, enjoying their reunion dinner and gifting auspicious red packets.
.
Auspicious and Fulfillment both went forth to explain to the white-haired grand-daddy figure, who was master of the house. They told him that they had wanted to search for a family outside of the village but had fatefully come across this warm and inviting sight It made them miss their family dearly, so they thought of joining in to usher in the new year.
The white-haired grand-daddy replied, “Well, we love to host guest service .” The whole family then warmly invited Auspicious and Fulfillment to join them for dinner. Afraid that they would catch a chill, the family provided warm clothing for them to put on. Before their departure, the family even handed them two big auspicious red packets for traveling expenses.
.
Auspicious and Fulfillment were both very touched by their gestures. In this family, they felt auspiciousness and virtuousness, and thus decided to deliver the Jade Emperor’s blessings to the family before contentedly embarking their journey back to the Heavenly court.
.
.
Like is a form of encouragement, and sharing is the best form of support.
?Welcome to share the post; may you reap multiple blessings!! ?
.
.
.
#SpringHamper, #BeginningOfSpring, #GreatVirtuousnessGathersFortune, #AuspiciousnessAndFulfillment, #GiftRedPackets, #GlitteryGoldIllumination, #Fortune
#春節大禮包、#新春、#厚德聚福、#吉祥如意、#發紅包、#金光閃閃、#福氣