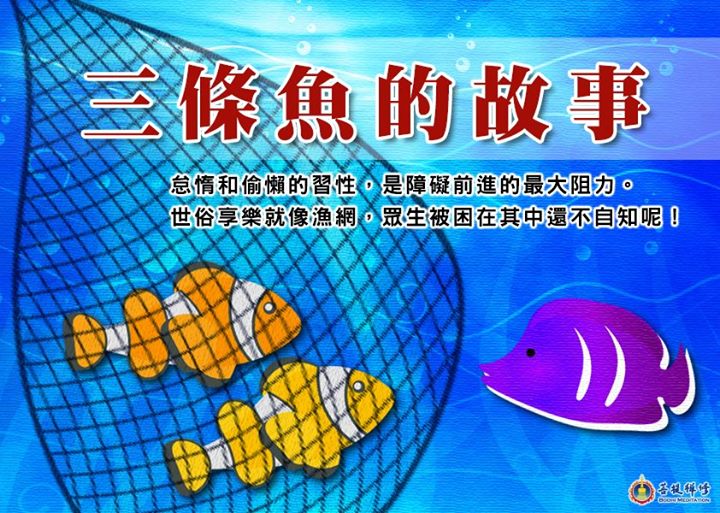 Once upon a time, there was a pair of fishes who were brothers and lived in the river. One of them was called Think Too Much, and the other was called Think Too Little. There was another fish called Think Just Right who lived in the same river. One day, the brothers decided to swim from the river in the jungle to the place where the humans lived. Think Just Right had a bad feeling about the place and warned the brothers: “This is a dangerous place. The fishermen will try to capture us with their baits and nets. Let us return to the jungle!”

Think Too Much and Think Too Little however, hesitated. They were complacent and were greedy for the abundant food found there. “Ok! We shall go back tomorrow.” But when tomorrow arrived, they would procrastinate the return by another day. Before they knew it, three months had passed.

One day, the brothers got lured into a fisherman’s net by the baits. They panicked when they realized that they were trapped. Fortunately, Think Just Right saw what happened and managed to bite through the nets to release them.

The brothers were grateful to Think Just Right for the rescue but they did not change their ways. They were still as complacent, lazy, and as enamored of the worldly pleasures as before. A few lifetimes passed. Eventually, Think Too Much and Think Too Little reincarnated to be dharma brothers in the same monastery. Even as monks, they were still as complacent and lazy.

One day, the dharma brothers decided to make a trip to pay their respects to Buddha. They finished their preparations and were ready to start the trip, but they kept telling themselves “Let’s begin the journey tomorrow!” One month passed before they finally began on their journey.

The moment Buddha saw them, he reprimanded them for the procrastination and for wasting their time. Knowing that life is unpredictable, how can you continue to waste the days of your lives? As they listened to Buddha, the dharma brothers repented deeply and finally resolved to change the bad ways of their past. At that moment, they attained enlightenment and were liberated from the sufferings of reincarnation.

Remember the fish Think Just Right who rescued the brothers from the net? That was Buddha in his previous life. The jungle is akin to the shores of liberation while the fishing net represents the traps of the pleasures in the secular world.

Moral of the story: complacency and laziness are the biggest obstacles to our growth. We always have plenty of excuses to justify our laziness – we would claim to be too busy today, promise to practice the next day, or simply claim to be too tired.

We ought to remember that life is unpredictable. A day spent without diligent practice is a day lost. Secular pleasures are like the fishing net that traps all sentient beings! This is something we need to be aware of, and be cautious about!

Today is Labor Day. Let it be a day of action for us!
In the Six Perfections, only diligence can overcome complacency, overcome the years, we have been held back by our bad habit of complacency.

May all of you be blessed with good health and happiness!!